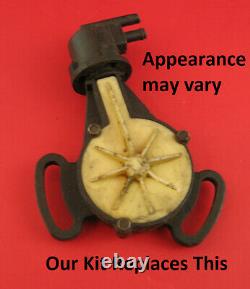 Ford 6.9L / 7.3L IDI. Vacuum Regulator Valve Mechanical Conversion Kit Fits 1983 - 1994 There are still tens of thousands of good reliable old IDI Ford Diesels running around the world - unfortunately, there are some parts that are getting to be very hard or impossible to find, and the vacuum regulator valve (VRV) is one of them. The VRV bolts to the side of the injection pump and receives a mechanical input from the throttle shaft which it then converts into a variable vacuum signal that serves as an input to the vacuum modulator on the C6 automatic transmission. The vacuum regulator valves are plastic and are easily broken when climbing around the engine compartment.
If your valve is broken or no longer functioning correctly we have a solution. This kit replaces the vacuum modulator on the side of the C6 automatic transmission with a mechanical modulator which is then connected to an included cable that connects to the throttle shaft on the injection pump. This system is simpler and more reliable than the original vacuum setup. The second picture shows an OEM VRV which our unit replaces. There were various designs through the years, so yours may vary somewhat in appearance Replaces the following part numbers (and others): E5TA-7B200-BA Instructions are included.
IMPORTANT: Will NOT most Fit 4x4 models because of insufficient clearance between the transmission / transfer case bracket this includes trucks equipped with the Borg Warner 1350 Transfer Case. If a delay occurs that is longer than would normally be considered commercially acceptable, we will attempt to contact you. Please take a moment to read it. Local auto parts stores will not pay your travel costs to return a part either. Applications We guarantee our parts to be as described by part number, picture, and verbiage.
While we do our best, vehicle applications, however, simply cannot be guaranteed. In most cases, we do not generate application lists. It is the nature of the auto parts business that, in rare cases, a part will not be correct for a certain vehicle even though it "should" fit.
This may occur because of errors on application lists, mid-year production changes, changes to the vehicle since it was built, the fact that a car was not built for the US market, etc. If a part does not fit your vehicle, this does not mean the part is not as described. Problems can be solved much more easily when civility is kept intact. This item is in the category "eBay Motors\Parts & Accessories\Car & Truck Parts & Accessories\Transmission & Drivetrain\Automatic Transmission Parts".
The seller is "accuratediesel" and is located in this country: US. This item can be shipped worldwide.